St Constantine, Scapegoat of the West

For the last 30 years or so I have read that the greatest villain, the one responsible for most of the ills of Christianity, was the Roman Emperor Constantine the Great. I’ve read it in academic texts, in undergraduate essays I’ve marked, in journal articles. I’ve read it in postings in electronic forums like BBS echoes, mailing lists and newsgroups. I’ve read it in numerous blogs and online journals, and in works of popular fiction like The da Vinci code.

This notion has become a myth, a legend, an unexamined assumption of stupendous proportions. People see no need to to substantiate the assertion, because “everyone knows” that it is true. And the number of things attributed to Constantine grows and grows. We are told that he censored the Bible, reducing the number of books in the New Testament to a mere 27, and that he ensured the dominance of Christianity in the world for the next 1500 years.

There are at least two historical phenomena that need to be examined. One is the question of St Constantine himself, and his alleged legacy, in the 4th-7th centuries. The other is the scapegoating of Constantine in Western culture in the 19th, 20th and 21st centuries.

There isn’t space in a blog post to deal adequately with either. It would take several books to refute all the assertions that have been made. My aim in this essay is more modest — to question some of the unquestioned assumptions, to point out some of the contradictions, in the hope that some church historians will take up the task. Actually it’s more than just church history. The assumptions are widespread, not just among Western Christians and Western theologians, but among neopagans and in secular circles as well.

I first really began paying attention to this when I was marking undergraduate assignments in Missiology at the University of South Africa. If there was one fact that almost all of them mentioned, and remembered, it was the Battle of the Milvian Bridge in AD 312. Whether it was relevant or not, it was a Fact, and therefore to be mentioned. None of them, however, knew anything about Christian mission between that date and Roman Pope Alexander VI who divided most of the world into Spanish and Portuguese spheres of influence in the 15th century.

The general Western belief seems to be that Constantine imposed an official belief on the Christian Church at the Council of Nicaea, which made the Christian Church dominant in Society for the next 15 centuries or more. This is repeated again and again, as if it were a simple, unquestionable and authoritative fact. Christians lived in a society in which they were the top dogs, and, for the most part, the only dogs.

Unfortunately in doing this they have tended to ignore or downplay some of the historical facts about Constantine and his legacy. It is commonly asserted in Western culture that Constantine imposed his version of doctrinal orthodoxy on the Church at the First Council of Nicaea in 325, and that thereafter the Church was obedient and subservient to the Roman state, a condition which, according to the common Western view, is adequately summarised by the adjective “Constantinian”.

What this ignores, however, is the fact that, far from imposing Nicene orthodoxy on the Church, Constantine and his immediate successors supported the anti-Nicene faction, and opposed the views of the Church expressed at the Council of Nicaea. St Athanasius, the Pope and Patriarch of Alexandria, was sent into exile five times during this period for his defence of Nicene orthodoxy which he, far more than Constantine, had helped to shape.

Constantine’s sin (in the eyes of the West) was that he proclaimed religious toleration in the Roman Empire in the Edict of Milan in AD 313. It is strange, in the light of this, that one of the things the West thinks important in constitutions of states is a guarantee of religious freedom. For Christians in Constantine’s time, he was the Liberator. He was like Simon Bolivar in South America in the 19th century, like Nelson Mandela in South Africa in the 20th century. When Mandela became President of South Africa in 1994, an era of constitutional freedom of religion began. All Christians were now free to preach the gospel, and not just the government-approved varieties, the Dutch Reformed Churches and (later) the Apostolic Faith Mission. I wonder whether, 15 centuries from now, missiologists will be telling their students about the evils of the Mandelan era.

Perhaps the most revealing assumption of all is the one that the “Constantinian era” lasted for 15 centuries. For the majority of Christians in the Roman Empire it lasted a little more than three centuries. In the seventh century most Christians became a minority group, and were treated as second-class citizens from then until now. But it appears that to Western scholars they do not count at all, and are not worth mentioning, because they are “non-Europeans”. Thus in speaking of “the Constantinian era” Western scholars display the very ethnocentrism, chauvinism and racism they are trying to distance themselves from by blaming it on Constantine.

For a good corrective to this, I recommend the book

From the Holy Mountain: A Journey in the Shadow of Byzantium by William Dalrymple

It is not a heavy treatise on church history, but more of a travel book, where the author retraces the travels of two monks in the twilight of the “Constantinian era”, just before it ended for the Christians in the lands where they travelled. Dalrymple is also not a propagandist or apologist for Orthodox Christianity. He writes from a Western secular/Protestant point of view.

If one wishes to talk about links between Church and State, it would be more accurate to speak of the Theodosian era, for it was the Emperor Theodosius who, 60 years after Constantine, made Christianity the official religion of the empire. But right up to the last ecumenical council the interests of Church and State did not always coincide, and often clashed. As Fr Michael Oleksa points out:

The iconoclastic controversy was the last, and ultimately unsuccessful, attempt by the Byzantine empire to influence church doctrine as it had often influenced church administration throughout the post-Constantinian period. Their opponents were mostly monastic theologians living beyond the boundaries of the empire where they could preach and write in relative security and peace. They pointed out that whereas in the Old Testament God never assumed visible form and could not be depicted, he had now become flesh, and to forbid ikons of the Saviour was tantamount to denying his humanity. They insisted that Christ not only assumed flesh temporarily, but also ascended in glory as transfigured man, having fully retained his human nature (Oleksa 1992:62). 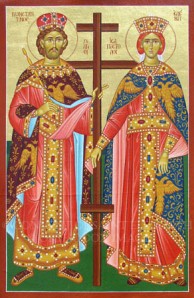 At times, indeed, the devotion to St Constantine takes on extreme forms, which do not always meet with the approval of the bishops, such as the Anastenaria or Firewalkers of northern Greece, who walk through fire on St Constantine’s day (May 21), carrying ikons of the saint.

And the contradiction continues. The Western Christians (and non-Christians) who denigrate St Constantine, and seek to blame him for the faults of their own history, actually demonstrate those same faults in their treatment of Eastern Christians. The crusaders of the 11th century and later paid no regard to the local Christians in the lands they “liberated”. They had not liberated them but conquered them. And this can be seen in the neo-Crusaders of the 21st century, whose actions seem calculated to eradicate Christianty from the lands of its birth and early spread.

So my appeal to Western Christians is this: next time you want to attribute something to Constantine, or to use the adjective “Constantinian” to describe something, stop and think what you are doing. Examine your assumptions, and only use the term if you are sure that is historically appropriate. And when you see the term in the writings of others, do not simply accept it uncritically, but question it.

7 thoughts on “St Constantine, Scapegoat of the West”