Traffic jams seem to be a way of life here, as just about every road in town (and the next town, and the one beyond that) is being dug up, widened, repaired, resurfaced and what not. So there are detours, deviations and diversions. The freeway to Johannesburg is narrowed to two lanes, or one, while they put a new piece of a bridge in place, or something.

Eventually (they hope in time for the World Cup in June) the freeway should be widened from three lanes to four or five, though the talk is that they will then make it a toll road, which should help to cut the traffic on it, as we look for alternative routes.

But yesterday a lorry crashed into some of the roadworks, where they are building a new bridge, and the chaos was far, far worse. The lorry turned over and caught fire on the northbound carriageway, under the new Atterbury Road Bridge. The Bridge is being widened, and usually has huge traffic jam in peak hours. 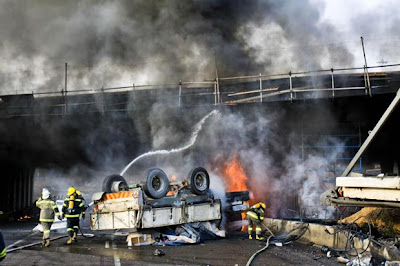 The crash happened on Wednesday afternoon, and the freeway was closed most of yesterday. The lorry hit a construction crane, and moved it by about a metre, so it had to be dismantled and rebuilt. The bridge was closed altogether for parts of the day as well. My wife usually goes along the freeway under the bridge to work, and it usually takes 15 minues, but it took her over two hours to get home yesterday.

I didn’t take the photo, I don’t know who did — it was sent to me by e-mail. Reports say that one person was killed and three injured. The dead man was probably the co-driver of the truck. The driver apparently ran away, and the police are investigating a possible charge of culpable homicide.