A puzzle for international financiers 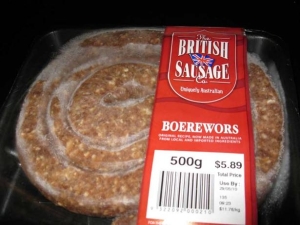 Let’s face it, the Brits and Australians can’t even pronounce “boerewors”, so what makes British boerewors uniquely Australian?

Or is that something that only international financiers can tell you?

It reminds me of something that happened 40 years ago, back in the old South Africa.

A friend of mine was called up by the army for a military camp “somewhere on the border”, to guard against all the “terrorists” who were trying to infiltrate from Zambia and points north.

And one night they were given for supper a tin of

Now that was at a time that the border was being guarded against people sneaking in from Zambia, and at a time that Zambia was boycotting South African goods (and by extension goods from South West Africa), and had been doing so for years.

But I don’t think it beats the uniquely Australian British boerewors.

Or is it kangaroo boerewors, with kangaroo meat being exported to Britain for turning into sausages?

I suppose that would make it uniquely Australian.