These are some memories of a train journey in South Africa in 1979. Train travel has probably changed a bit since then, as it was nearly 35 years ago. I was living in Melmoth, Zululand, and needed to travel to a church synod in Grahamstown. Most people travelling to such things went by air, but the travel allowence covered the cost of a second-class train ticket, and I generally preferred the more leisurely pace of train travel. Apart from anything else it would give me time to look at the synod documents.

Someone gave me a lift from Melmoth to Durban, and I got on the train in Durban station, which left at 7:30 pm on Wednesday 28 November 1979.

The train, like many mainline trains in South Africa in those days, was a composite one. The main destination was Cape Town, but there were some coaches destined for Port Elizabeth and East London, which would be shunted off at the appropriate places. There wasn’t a coach going to Grahamstown, so I got on one of the Port Elizabeth coaches. I would have to change at Alicedale.

The train was hauled by two Class 5E electric locomotives of 2000 horsepower each.

There were three other guys in the compartment, all railway people who had been to write an exam for promotion, and had come from Port Elizabeth — Christo van der Merwe, and Martin van Antwerpen, and another guy who consumed enormous quantities of cane spirit, and they all drank fairly heavily. I sat reading a book on wills most of the time before going to bed on the top bunk.

I woke up just before the train reached Swinburne, and went to a compartment in another coach, as everyone else in my compartment was sleeping. It was not possible to sit in the compartment while others were sleeping, as the back of the seat lifted up to form the middle bunk, while the top bunk was pulled down from the wall above it. Once everyone was awake and up the usual practice was to let down the middle bunks so one could sit, and dump all the used bedding on the top bunk, where the bedding attendant would collect it.

At about 6:00 we reached Harrismith, and I went out and bought a Coke. There was no dining saloon on the train, only a refreshment car, from which I bought a couple of pies, and the train went on to Bethlehem, and there they took off the electric locos and put on a steam one, a Class 25 NC Henschel. The NC, I think, stands for “non-condensing” — some of the Class 25 locomotives that ran in the drier parts of the country had an extra tender with a condenser to re-use the steam.

At Bethlehem there was some shunting.

The train from Durban and the train from Johannesburg arrived at roughly the same time, and the coaches from the Johannesburg train were added to ours. The train from Johannesburg went to Bloemfontein via the eastern Free State, and I had travelled on it about 20 years previously on school camping trips, including a pony trek in the mountains of Lesotho. On those trips we got off at Fouriesburg, where the station was six miles from the town, and the town was six miles from the Caledonspoort border post with Lesotho, where we stayed at the Wyndford Guest Farm. Back in the days of those trips (1957/58) one did not have to show passports at the Lesotho border.

Steam locomotive hooking up to the assembled train

Eventually all the coaches had been shuffled to their right places on the train, and it went very slowly up the rather steep climb out of Bethlehem. I remembered that from the earlier school trips, as the train went little faster than walking pace.

I sat and watched the Eastern Free State countryside go by, and read Ben Temkin’s biography of Gatsha Buthelezi, and we reached Modderpoort about 3:00. There were several steam locomotives there, though they had disappeared almost entirely from Natal, and they seemed to be getting fewer and fewer.

We had just left Marseilles when the train stopped, and it appeared that a soldier had fallen from the train, so we went back to pick him up from where he was lying on the side of the track, and then the train reversed into Marseilles station for him to be taken to hospital. He was unconscious, but whether from his fall or the liquor he had consumed beforehand it is hard to say. One could only say a prayer for him.

The long slow climb out of Bethlehem

That incident delayed the train for an hour, and it arrived at Bloemfontein just after sunset, but there was a long wait at Bloemfontein anyway for shunting in to connect with the train from Johannesburg — the train was broken up completely, with some coaches going to East London, some to Kimberley, and ours to Port Elizabeth. There was a through coach to Grahamstown that came in on the Joburg train, so I moved my things to that. There was also a proper dining saloon, though it was now closed for the night. I was in a coupe on the Grahamstown coach, which I had to myself. From Bloemfontein we had exchanged the steam for a diesel locomotive, and went on south through the night, the second night on the train.

This part of the journey was of some interest to me, as my great grandfather, William Matthew Growdon, had helped to build the line. He came from Cornwall in 1876 and was a platelayer for the Cape Government Railways (CGR) and ended his career as a permanent way inspector stationed at Bethulie in the southern Free State. After retiring he went to live in Queenstown, but died in a carriage accident a few months later. On this particular trip, however, we passed through Bethulie in the middle of the night, so there was nothing to see. 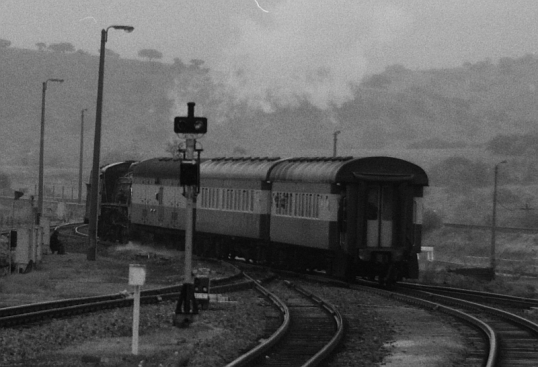 The Grahamstown coaches are taken off the Port Elizabeth train at Alicedale, and hooked to the back of a goods train

I woke up with the train travelling through the Eastern Cape countryside somewhere near Cradock, and went to the dining saloon for breakfast, and sat with a chap who was a charismatic Anglican from St Nicholas in Port Elizabeth, and so had a long talk with him over breakfast, and then went back to my coupe to read the synod papers, and then had morning tea again in the dining saloon, until reaching Alicedale, where they shunted us off to make up the Grahamstown train, which was again steam-hauled, this time by a Class 19D.

The Grahamstown train acually went through to Port Alfred on the coast, and was a mixed passenger and goods train, with the passenger coaches at the back. There was another steep climb out of Alicedale, though the train did not go quite as slowly as it did out of Bloemfontein.

The last stage of the journey — Alicdale to Grahamstown.

It had turned cold and raining, and the train reached Grahamstown about 3:00, and Godfrey Ashby, the dean of Grahamstown and bishop-elect of St John’s, picked me up at the station and drove me to Kimberley Hall of Rhodes University where most of the meetings were to be held.