Bathed in the coloured vomit

Last night I travelled along this stretch of road, perhaps for the last time — the N1 highway going north. I’ve travelled along it quite frequently, taking our son Simon home from work, with his bicycle. He cycles to work in the day, but at night we try to fetch him, because it’s harder for motorists to see cyclists in the dark. 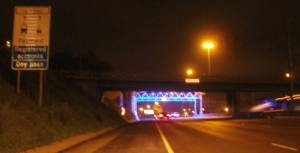 It’s just on at one intersection at Atterbury Road, and off at the next, the N4 interchange, but in between is one of those toll gantries with its ominous blue lights. And today the toll gantries started operating, or so they said, so I probably won’t be going down that stretch of road again in my lifetime.

Toll roads were introduced in South Africa in the 1970s. Up till then roads had been paid for by the roads fund, which was financed by a fuel levy. It was a good system, and worked on the “user pays” principle — the more you used the roads, the more fuel you would use, and the more you would pay. Heavy vehicles, which caused more wear to the roads, also used more fuel, and so paid more.

But the National Party government wanted to finance the invasion of Angola in 1975, and so it diverted money from the Road Fund for that, and introduced toll roads. When the ANC government came in in 1994, we hoped that the privatisation of infrastructure like public roads would stop, and perhaps be reversed, but the ANC government seems even more eager to expand the toll road system.

But the decision to introduce tolls on the busy urban freeway system of Gauteng has sparked unprecedented resistance. Zwelinzima Vavi, the trade union leader, said yesterday on Twitter ‘let’s unite & teach SANRAL & Govt the real meaning of “The People Shall Govern”‘ He was the leader of Cosatu, the biggest trade union federation in South Africa, and was recently suspended, many suspect because of his opposition to toll roads.

Many other influential people have said they will not register or pay etolls, including a number of church leaders:

Church leaders vowed on Monday to refuse to pay to use Gauteng freeways and called on others to do the same.

“We… church leaders, have therefore decided to publicly declare our intention to refuse to buy e-tags and to refuse to pay this unjust e-toll,” they said in a statement.

“… We call on all other church leaders, members of our churches and all South Africans who support democracy to do the same.”

However, it had to be made as the government was not listening to the people.

They said they were shocked and disappointed to hear the government ignore the people’s protests and push ahead with e-tolls.

And I don’t think this will be the end of it, it’s only the beginning.

To paraphrase a poem by John Betjeman:

When all our roads are lighted
By glowing monsters sited
Like gallows overhead
Bathed in the coloured vomit
Each monster belches from it
We’ll know that we are dead.

2 thoughts on “Bathed in the coloured vomit”