I enjoyed this novel about wannabe beatniks in Bedford, England, perhaps because I too was a wannabe beatnik. The point here being that a wannabe beatnik is a wannabe wannabe, at two removes from the real thing. There were the Beats, a literary countercultural movement of the 1950s, and then there were their groupies, their hangers on, nicknamed “beatniks” by a journalist, by analogy with sputnik, the first artificial satellite to orbit the earth, launched from the Soviet Union in 1957, the year in which Jack Kerouac‘s novel On the road was published. As sputnik orbited the earth, so did beatniks orbit the Beats.

The problem is that the characters in this book, Jack and Neal and Maggie and Mary are just about 40 years too late. Jack and Neal are not their real names, they have adopted the names of their heroes, Jack Kerouac and Neal Cassady. Jack, especially, is obsessive about being “cool” and “hip”, and sees them as angelheaded hipsters burning for the ancient heavenly connection to the starry dynamo in the machinery of night. But in the rather middle-class surroundings of Bedford it is rather difficult to picture them as those who poverty and tatters and hollow-eyed and high sat up smoking in the supernatural darkness of cold-water flats floating across the tops of cities contemplating jazz, to quote Allen Ginsberg‘s poem Howl. Ginsberg read his poem at a now-legendary poetry reading in San Francisco, which sparked off a poetry renaissance. So in the book Jack organises a poetry reading in the Bedford Public library, reading his own poetry, which even his admirer Mary has to admit is excruciatingly bad.

As Jack Kerouac’s character Sal Paradise goes on the road, hitch-hiking across America, so Jack and Company go on the road… to Brighton, where they stay with a dead poet’s uncle, and try to live up to Jack’s impossible ideals of hipness and coolness, and will not acknowledge anything that has happened in the world after about 1966. But there is also a sense in which they get the time-frame wrong. Jack tries to follow the scenario of On the road, but though it was published in 1957, it was about the Beats of the 1940s, not the 1950s, and by the mid-1960s it was almost all over, though it had a kind of revival, in a form that Jack could not accept, in the hippie movement of the 1960s.

To say much more about the story would reveal too much of the plot, except that in the end even Jack comes to realise that he has been trying to live an impossible dream, and the shattering of his illusions has shattering consequences for them all.

The basic problem, of course, is that to be obsessed with the ideal of “coolness” is the antithesis of cool, and the harder they try to adhere to it, the farther away it recedes. So Jack becomes a kind of Great Gatsby of the 1990s, trying to relive an imagined past.

I don’t think you have to be familiar with Beat Generation literature to enjoy this book, but it wouldn’t hurt to have read a couple of books by Jack Kerouac, and Ginsberg’s poem Howl. You can find some useful links here.

So much for the “review” part of this, which I shared on Good Reads, but perhaps there is more to be said. I was turned on to Beat Generation literatrue by an Anglican monk, Brother Roger, of the Community of the Resurrection, when he read a paper at a student conference. The paper was Pilgrims of the Absolute, and if you click on the link, you can read it too. 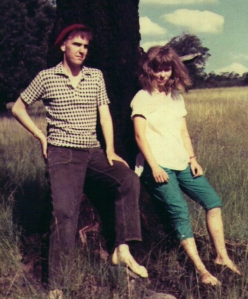 Waiting for Godot, in Linbro Park

As I said, I could identify with the with the characters in the book to some extent, because I too was a wannabe beatnik. There we were, practising waiting for Godot in Linbro Park, which we drove to in a beat up old car with a half-jack of white Malmsey under the front seat. Godot never came, of course, and we didn’t wait all that long either — just till the wine was finished. That’s part of being a wannabe — when you get bored with it you can pack up and go home. Actually the place where the picture was taken is now all built up, and is called Far East Bank, but back then it was just empty veld between Alexandra and Linbro Park.

In the book beatniks Jack refuses to travel to Brighton on the motorway, because it wasn’t built in 1966. Well, we didn’t travel on the N3 highway back when the photo was taken, for the simple reason that it hadn’t been built yet. Now runs across the hilside a couple of hundred metres past my right elbow in the picture. And, like Jack, I still don’t drive on the N3 even though it is there now, but for a somewhat different reason — they’ve started charging tolls on it, but that’s another story.

I suppose the difference between us and the characters in the book is that we were closer in time, if not in distance, to the people we sought to emulate, perhaps 3-5 years after, rather than 35 years later. And we were not quite so obsessive as the people in the book about living other people’s lives. We thought some of their ideas were good, and some not so good, some things we would like to emulate, and others not. Most of it needed to to be adapted to other times, other places, other circumstances.

The hippies, who followed the Beats about 10 years later, adapted their movement, so that it was not mere imitation They coined a phrase for it, “Do your own thing”. But the characters in the book were trying very hard to do someone else’s thing, and that, as I’ve already said, is the antithesis of “cool”.

There is a saying attributed to Dostoevsky, “Talk nonsense, but talk your own nonsense. It is better to go wrong in your own way than to go right in somebody else’s.”

One thought on “Beatniks”