Continued from UK trip 16 May 2005: Brightlingsea to Twickenham | Notes from underground

We left the cottage at about 8:00, took the bus to Richmond underground station, and then the underground to Colindale, to visit the newspaper library, and spend several hours there looking at newspaper death announcements and obituaries, though the obituaries did not seem to begin in earnest until the early 20th century.

At Colindale Underground station on the Northern Line.

Then we went down to Tottenham Court Road, and walked down Charing Cross Road, where we looked at Foyle’s bookshop, but bought nothing, partly because of the overwhelming choice available, and partly because Val was worried about the extra weight if we tried to carry too much back on the plane. 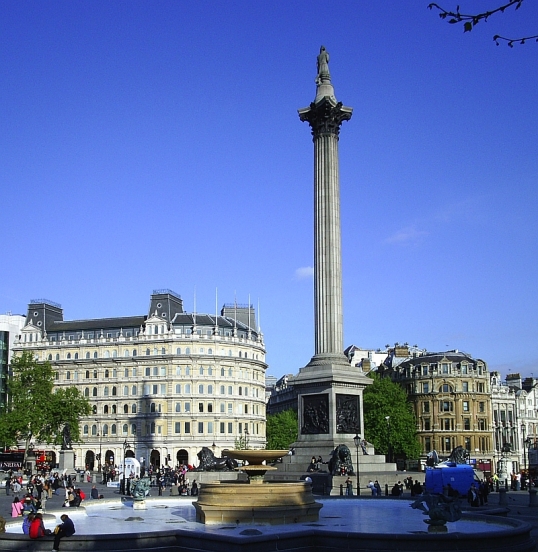 No South African account of being a tourist in the UK would be complete without a picture of Trafalgar Square, with South Africa House in the background, so here’s the obligatory shot.

We wandered down to Trafalgar Square, and then got a bus to Aldwych, and another to Waterloo, where we discovered that our visitors travel passes were also valid on Southwest Trains, part of the old southern region of British Rail, now privatised. The trains were modern, and came in a variety of bright livery, in contrast to the dull green of the Southern Region of British Rail in the 1960s, though the one we rode on to Strawberry Hill had graffiti scratched on the windows. We picked up several abandoned newspapers on the train, so we didn’t have to buy one. 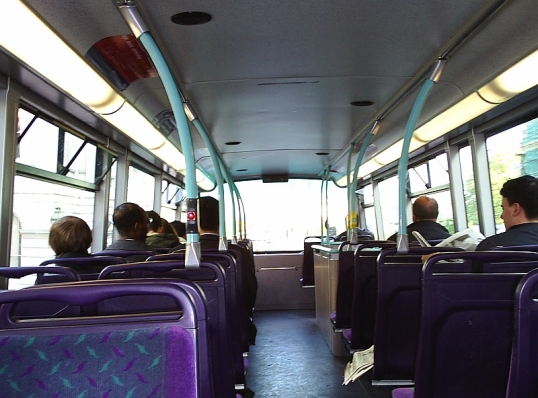 On a London bus.

We got off at Strawberry Hill station and were back at the cottage about 8:00 pm, and walked up to a neighbourhood pub, the Prince Blucher. On the way we passed the green, where a neighbourhood cricket game was in progress. Such scenes always call to mind the song by The Who:

I want to play cricket on the green
Ride my bike across the stream
Cut myself and see my blood
I want to come home all covered in mud
I’m a boy, I’m a boy
But my Ma won’t admit it.

We had bangers and mash for supper at the pub, which was very good, though it cost twice what a similar meal would have cost in South Africa — about 6 pounds, equivalent to about R70.00. I had a pint of bitter and Val had a lager shandy, which she has been drinking ever since the day we arrived, when Richard Wood had one.

We walked round the block, down Second Cross Road, and there were three pubs in that block alone. It makes a difference in the way one lives, that one can go walking to a local pub in an evening. In South Africa there is no real equivalent, though possibly the Dros chain of restaurants perform the same function, but one cannot afford them for family meals, and would only go for special occasions, and not just for a drink. But one cannot just walk down the road to them, it means getting in the car and making a special outing. In the townships there are shebeens within walking distance for many, but they are for serious drinkers, and don’t usually serve food.