Visiting more old friends in and around Cape Town

Continued from In and around Cape Town: family and friends

We went to see Sam van den Berg, a former colleague from the Editorial Department at Unisa, and had dinner with him and his son Maritz at the Salty Sea Dog restaurant in Somonstonw. 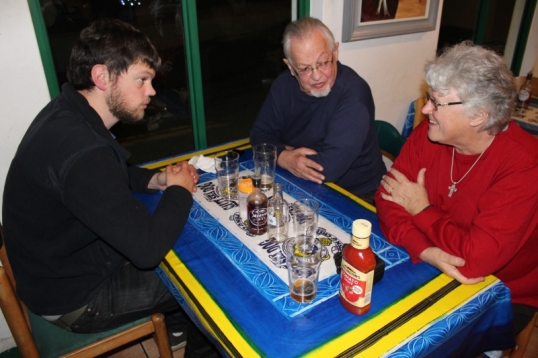 Sam got into trouble with the higher-ups at Unisa for objecting to the poor quality of study material from the Education Faculty, which we believed amounted to fraud — taking money from students for rubbish. In those days (early 1990s) Unisa wasn’t interested in quality control. I hope that with all the talk of “transformation” there has now been some improvement, and that it is not just talk.

Then the following evening, after our usual day spent at the archives, we visited Jim and Jeanette Harris. Jeanette was an old friend of Val’s from primary school in Escombe, Natal, and they had not seen each other for many years. Jim had worked in a similar field to me, theologicval education and training for ministry in the Anglican Church, so we had a lot to talk about.

Continued at More cousins and friends in and around Cape Town