Continued from Ghwarriespoort to the Gariep Dam

We woke up at Oviston, overlooking the Gariep Dam, and watched dawn breaking over the water.

The place where we was staying was right next to the pumphouse where the water from the Gariep Dam is pumped out to supply Port Elizabeth, via the Orange-Fish river tunnel.

Pumphouse on the Gariep Dam to provide water for Port Elizabeth

We left Oviston at about 7:20 and drove towards Bethulie. We crossed the Orange River again on a road/rail bridge, more or less where it enters the dam, far upstream from where we had crossed it a couple of weeks earlier at Kakamas. We stopped on the bridge to take photos and only one vehicle crossed the bridge while we were on it. It was in quite bad repair on the Free State side, with grass growing in cracks, and concrete blocks covering the pipes carried across the bridge all broken. I wondered who was responsible for its maintenance.

Bridge over the Orange River near Bethulie, looking north to the Free state side.

We reached Bethulie and drove in to the town. There seemed to be only one garage, and we filled up with petrol. The garage attendant spoke South
Sotho, and I could thank him in that language. We looked for a place to eat breakfast, but the only one that looked open said it only started serving food at 10:00 am. I wanted to pass through Bethulie because it was associated with my great grandfather William Matthew Growden, who, when he retired from the railways in about 1908, bought a farm, Mooifonein. He was actually based at Springfontein, which was a bit west of the route we were taking, but it was in the magisterial district of Bethulie. Bethulie seemed pretty dead for a Saturday morning.

Entrance to Bethulie in the Free State

We set out for Smithfield, passing a strange, almost symmetrical conical hill on the way, and wondered if, like, the slab of butter mountain at Vanrijnsdorp, it could be disguising the nose cone of an alien spaceship.

Conical hill near Bethulie — disguising the nose cone of an alien spaceship?

Smithfield turned out to be a very nice place, bigger than Bethulie, and much better maintained than many Free State towns, in contrast to Wepener, which we had passed through on our last trip to the Cape four years ago, it seemed to be the kind of town where everything worked. There was a place called Buckley’s, open for breakfast, with a very pleasant garden, a friendly waiter called Martin Booysens (he was described as a “waitron” on the cash slip, which seems to be a peculiarly South African term, and makes him sound like a robot. It had good food, which made a change from all the chain restaurants which serve the same predictable stuff.

We left on the road to Wepener, which was a gravel road, crossing typical highveld grassland, and like most Free State gravel roads was in fairly good repair, and there were signs that it had recently been graded. We joined the tarred road to Ladybrand a couple of kilometres north of Wepener, and it was in better repair than it had been four years ago, in that many of the potholes had been patched, but the signs warning of potholes were still up from four years ago, and were now somewhat faded. We began to see fruit trees in blossom along the side of the road, at random intervals, and concluded that they must be from cherry pips that people had thrown out of car windows. Val recalled a vegetable hawker who, many years ago, had given her aunt a sales pitch for cherries he was selling, and assured her that they came from “Ficksburg, Madam, where Jesus was born”.

There are lots of fruit trees growing alongside the road to Ladybrand in the Free State, perhaps spring from pips spat out by passing motorists. The picture does not do the pink blossoms justice.

We stopped for lunch in Fouriesburg, and reached Clarens at 4:15 pm, and there noticed, as we had throughout our journey through five of South Africa’s nine provinces, the inequality that still persists 21 years after the end of apartheid. Clarens is regarded as the jewel of the Free State, and middle-class people from the big cities retire there, or go to spend weekends there, but, like almost every town we have passed through, it has a shanty town where poor people live.

Clarens, an idyllic village in the mountains of the eastern Free State

There was a pattern to development in many towns, particularly noticable in towns in the North West Province and Northern Cape, that as you left the town you passed apartheid-era matchbox houses, then the rather smaller RDP houses of the 1990s, and last of all the shanty towns, or “informal settlements” as some call them. The ones in Clarens were somewhat better than most, in that the number of shacks was proportionately smaller than in the north west, and almost every garden had one or more fruit trees in bloom, and in some places people had planted neat vegetable gardens.

Clarens in the Free State — the bits the tourist brochures don’t usually show.

We stayed with my cousin Peter Badcock Walters and his wife Toni. Some years ago they bought an old sheep-shearing shed, and converted it into self-catering apartments, now called The Clarens Country House. 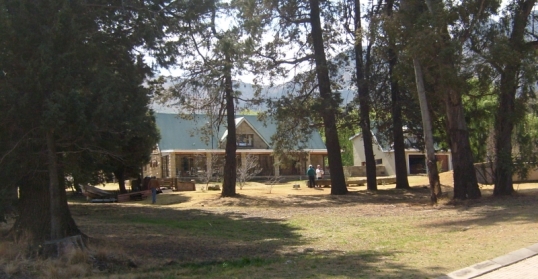 Peter has also built an art gallery in the centre of Clarens, The Gallery on the Square, where he exhibits his own art work and that of other artists. He had done many book illustrations, including The Illustrated Bosman. 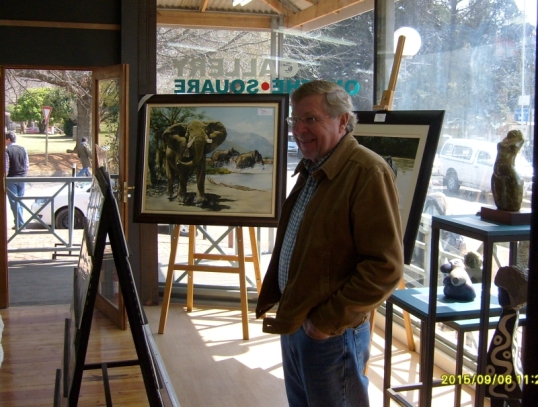 Peter Badcock-Walters in The Gallery on the Square

Also on display were drawings from an earlier book Images of War. 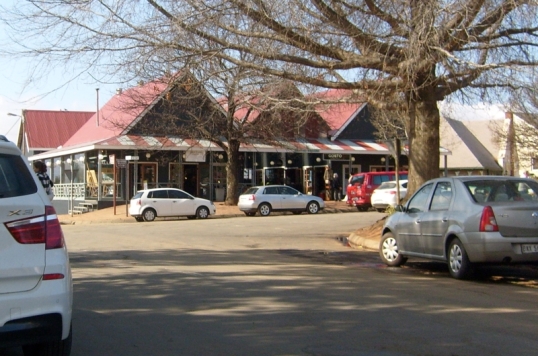 The Gallery on the Square, Clarens

Concluded at Clarens, and home again.