This has been a week of re-establishing contact with old friends whom we havent seen for many years.

On Monday we went to Johannesburg to see Pat and Barry Schmidt, whom we knew in Melmoth more than 30 years ago. For the last 21 years they have been living in Queensland, Australia, and we have been in contact with them through Facebook, but they were visiting South Africa, and it was much more satisfactory to chat face-to-face. They were staying with Dareth and Anne Baker, whom we had also met when they visited Melmoth.

On the way home we left the highway at New Road in Midrand to avoid the tolled sections, and went to a relatively new shopping centre, called the Carlsbad Lifestyle Shopping Centre — lifestyles to suit every taste and pocket, presumably. We had lunch at Piatta’s restaurant, where they were offering a special for Mandela Day: 200g rump steak, and one veg, and a glass of wine for R67.00. Not bad for these days, and it was very good. But I looked in my diary and saw that 40 years ago, in July 1976, we had had dinner at the Caister Hotel in Durban with Val’s parents. They had a carvery — three-course meal, soup, main course and pudding. A choice of roast beef, pork and mutton, and a large variety of vegetables, as many or as few, and as much and as little as you choose. The price? R3.40.

Piatto Restaurand at the Carlsbad “Lifestyle Shopping Centre” in Midrand

We resumed our homeward journey, off the tollway, and passed St Sergius Church, whose domes were looking rather nice in the afternoon light. 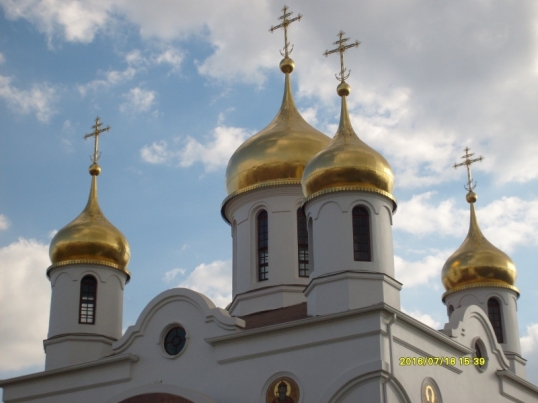 When we got closer to home we saw a strange sight — spring blossoms in Magnolia Dell. This was 18th July, less than a month after the winter solstice, so still really midwinter. Global warming? We have had no frost at all this winter, so it feels that winter hasn’t properly begun yet, and suddenly there are signs of its ending.

And then today we had lunch with Allan Anderson, a former colleague in the Missiology Department of the University of South Africa, who has been at a theological research institute at the University of Birmingham in the UK, for research into Pentecostal and charismatic Christianity.

As we are wroking in similar fields, we had a lot of catching up to do.

One thought on “Old friends and early spring”