Archive for the tag “black culture”

Is Violence the Only Thing Power Understands?

An incident of police brutality in Baltimore, USA, sparked off rioting, leading to a media feeding frenzy, and pundits asking “Why?” And amid all this, the proximate cause of the unrest seems to have been lost, even by Counterpunch The Cry of the Dispossessed in Baltimore — CounterPunch:

The reason the dispossessed turn to violence is because violence is the only thing power understands.

Baltimore is burning, embroiled in riots and protest against the city’s horrifically racist and oppressive police. That it took the death of Freddy Gray, a young man whose spine was severed in police custody, to spark the violence is perhaps less important than the fact that the explosion was inevitable.

A similar incident in Ferguson a few months ago was followed by a decision of the justice system not to prosecute the police officers involved. The message this sends to the general public is that the police can beat up people with impunity.

Not in Baltimore, they can’t. 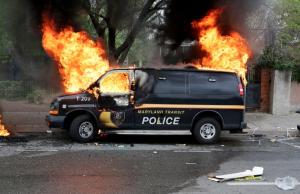 So when the police beat up people so that they die in custody, in Baltimore, the police are punished. After what happened in Ferguson (and elsewhere), did police in Baltimore really think that there would not be a resolute reaction?

Of course this leads to all kinds of moralising about how people shouldn’t “take the law into their own hands”, but if the guardians of the law are lawless, what else can people do? In whose hands should the law be?

I recall an incident more than 30 years ago, when I met with a group of Anglican Church leaders in a chapel in a garage in Johannesburg. They met regularly for Anglican Evening Prayer, which usually includes reading from the Psalms, but this time they wanted to omit the reading of the psalm because they wanted to spend more time praying for Phakamile Mabija, an Anglican Church youth worker who had died in police custody, by defenestration, if I recall correctly, which was quite common in those days.

But it was a mistake to omit the psalm, which for that day was Psalm 93/94, and spoke to the situation quite clearly:

Steve Biko had just suffered a similar fate to Phakamile Mabija, so it was not “an isolated incident” as the forces that imposed disorder as law tried to maintain.

Things are not much better in South Africa now, as the massacre at Marikana a couple of years ago clearly shows. There is much talk in South Africa about “transformation”, but the incidence of police brutality shows that there has been little transformation where it really matters.

It is surprising then, to see that Counterpunch, which often focues on aspects of issues that have been neglected by the mainsteam media, seems to be following the mainstream media in saying “That it took the death of Freddy Gray, a young man whose spine was severed in police custody, to spark the violence is perhaps less important than the fact that the explosion was inevitable.”

There seems to be a similar tendency in South Africa in relation to recent xenophoic violence, as I have noted here, and my friend John Aitchison put it in a nutshell when he said “We have to distinguish between factors that give xenophobia momentum – poverty, unemployment, inequality – and the actual precipitating mental/emotional constructs that are the tinder that is set alight and then enflames the said poverty, unemployment, inequality, etc. . start it going.”.

The tinder that set alight the rioting in Baltimore was police brutality, yet most of the articles in the media seem to be evading that. The media and Twitterati seem to go on and on about finding the causes of such violence in “black culture”, but don’t seem to see the problem that is right under the noses — they should be looking for the problem in police culture. And we should be looking for the causes of the problem in police culture in South Africa too.

And, in the USA at least, it seems that there is at least as big a problem in “white culture”, which often seems to be ignored by the media, as seen here: 11 Stunning Images Highlight the Double Standard of Reactions to Riots Like Baltimore:

The city of Baltimore has been besieged by riots Monday night — and police are on the scene ready to serve, protect and subdue.

This has become an evergreen narrative in the aftermath of reactions to state-sanctioned violence against black people. But that it persists sends a troubling message about how officials and, by extension, many of the people they serve regard rioting: specifically, when there’s white people involved versus mostly black people.