Archive for the tag “Cadburys”

The Bishop and the chocolate factory 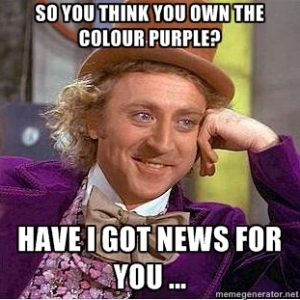 One instance where this guy’s opinion is spot on

A Church of England bishop challenges Cadburys UK over its self-proclaimed rights to the colour purple.

Bishop’s challenge to Cadbury over the colour purple – Telegraph:

A leading bishop has issued a warning to the US-owned confectionery giant after a small Christian fair trade producer was forced to redesign its products because Cadbury had successfully trademarked the colour for the sale of chocolate.

In a landmark High Court victory last week Cadbury, now owned by the US conglomerate Kraft, saw off a challenge from its rival Nestle over the exclusive rights to use the distinctive shade of purple used on its Dairy Milk wrappers.

The ruling was the culmination of a long-running legal battle between the two of the world’s biggest confectionery companies but it has also forced a rethink by one of the smallest.

The Meaningful Chocolate Company, based in Manchester, produces a special range of fair trade chocolates for Christmas and Easter with a Christian message.

Last Christmas it sold a range of chocolate Christmas tree decorations with nativity scenes, displayed in a purple packaging – the colour long recognised by the Church as symbolising advent.

But the company has been forced to switch to scarlet wrappers this Christmas after being advised by intellectual property lawyers that it could be infringing Cadbury’s rights.

This seems to be the same kind of bullying that was seen a few years ago when an American firm took over the SPCK Bookshops in the UK, and systematically destroyed them. And, perhaps unsurprisingly, this comes with a hat-tip to the very same Phil Groom who was one of the whistle-blowers on that.

As someone has suggested, perhaps we should extend the Advent Fast to cover Cadbury’s chocolate. We have sometimes eaten their Bournville dark chocolate during the fast, because it is non-dairy, so maybe we’ll drop that now too. I wonder if  Cadburys in South Africa is also owned by Kraft?

Orthodox Christians don’t really do purple for Advent, but that doesn’t mean we can’t sympathise with those who do when they are bullied for it.