Archive for the tag “intolerance”

Here’s a concise summary of what has absorbed the news and the blogosphere recently. 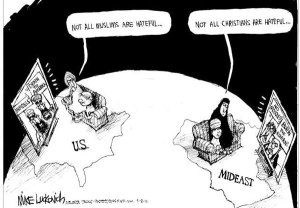 Debbie Christie’s son Zachary, a first-grader at Downes Elementary School in Newark, Del., was suspended for carrying a camping utensil that contained a spoon, fork, bottle opener and knife to school.

‘I wasn’t really trying to get in trouble,’ 6-year-old Zachary said. ‘I was just trying to eat lunch with it.’…

School administrators deemed Zachary to be in violation of their zero-tolerance ban on weapons, and he may have to attend the district’s reform school.

Fr Thomas Hopko said the following about tolerance, in a paper read to an Orthodox mission conference ten years ago. I think it’s very good and worth repeating:

Tolerance is always in order when it means that we coexist peacefully with people whose ideas and manners differ from our own, even when to do so is to risk the impression that truth is relative and all customs and mores are equally acceptable (as happens in North America).

Tolerance is never in order when it means that we remain idle before wickedness which harms human beings and destroys God’s creation.

To be tolerant is to be neither indifferent nor relativistic. Neither is it to sanction injustice or to be permissive of evil. Injustice is intolerable and evil has no rights. But the only weapons which Christians may use against injustice and evil are personal persuasion and political legislation, both of which are to be enacted in an atmosphere of respect. While Christians are permitted under certain conditions to participate in police and military actions to enforce civil laws and to oppose criminality, we may not obey evil laws nor resort to evil actions in defence of the good. This means that Christians are inevitably called to suffer in this age, and perhaps even to die. This is our gospel, our witness and our defence.

A bloke called Harry Blamires wrote a book The will and the way more than 40 years ago, and among other things he said (I quote from memory, having lent the book to someone who didn’t return it) that we should be clear about which God we prayed to this morning; was it the Christian God, or was it the God of twentieth-century sentimental theology, who grants us the dubious capacity to face all comers, friend or foe, with the same inscrutably acquiescent grin?

But that dubious capacity is what many people seem to mean by “tolerance” nowadays. Not only should we be tolerant, but we should also be reconcilers, seeking on every possible occasion to reconcile good with evil, justice with injustice, freedom with oppression. We should respect human rights, including the right that some people arrogate to themselves of killing and ethnic cleansing and oppressing others.

And this was the argument that conservatives used against liberals who opposed apartheid. “You call yourself a liberal, by why are you so intolerant of the Nationalists who want apartheid? Don’t they have a right to their opinion too?”

And so when Fr Tom says: “Tolerance is never in order when it means that we remain idle before wickedness which harms human beings and destroys God’s creation” I think he hits the nail on the head.

(Also posted on my LiveJournal