Archive for the tag “Mandela Effect”

Did you know about the Mandela Effect?

I was quite puzzled by many references I found on the Internet to something called “the Mandela Effect”. It popped up in questions about Nelson Mandela on the Quora web site.

At first I thought it must be another term for the “Madiba Factor”, which referred to the fact (or perception) that if President Nelson Mandela was physically present at a sporting event, the South African team would win, or at least do well. This started from the day of his inauguration on 10 May 1994, when immediately after his inauguration he went to the FNB Stadium, where the South African football team beat Zambia in a friendly match.

The notion of the Madiba Factor was reinforced when South Africa won the Rugby World Cup in 1995 and the Africa Cup of Nations in 1996.

The Madiba Factor: 3 Feb 1996: The captain of the winners of the African Cup of Nations Final Neil Tovey of South Africa holds the cup aloft after President Mandela presented it to him. South Africa won 2-0. Mandatory Credit: Mark Thompson/ALLSPORT. And we were there, so not a false memory.

But it seems that the Mandela Effect was something else entirely.

The Mandela effect term was coined by Paranormal researcher named Fiona Broome after the the phenomenon of thousands remembering Nelson Mandela passing away in Prison in the 1980’s however the Same Nelson Mandela lived clear until 2013. He was the President of South Africa. Some have no memory of the prison situation and others only know of him being the President of South Africa. (Answers to “What is the Mandela Effect” on Quora).

But it’s funny — I don’t recall ever thinking that Nelson Mandela died in 1980, nor did I know of anyone else who thought so. So when I first heard about “the Mandela Effect” a couple of years ago it struck me as very weird indeed.

So I’m asking my friends and anyone who reads this — had you ever heard of the “Mandela Effect” before reading this? Did you ever, at any time, think that Nelson Mandela had died in the 1980s? I’m wondering if the belief that many people thought that Nelson Mandela died in the 1980s might itself be a false memory, and perhaps it should be called the Broome Effect rather than the Mandela Effect.

As a South African, I thought I knew what the Mandela Effect, also known as the Madiba factor, was.

It originated on the day Nelson Mandela was inaugurated as South Africa’s first democratically elected president on 10 May 1994. Having stood in the crowd at the Union Buildings and waved our flags, we returned home and sat down in front of the TV and watched an international football match — South Africa versus Zambia. And we won.

Nel;son Mandela had gone from the Union Buildings to the FNB Stadium by helicopter, and was watching the match in person.

The next year, 1995, South Africa won the Rugby World Cup, and Nelson Mandela’s role in that was documented and made known to world through the film Invictus.

In 1996 we made the trek to the FNB Stadium, and saw South Africa play Tunisia in the final of the CAF Africa Cup of Nations. Nelson Mandela was there, and South Africa won. The Mandela Effect was well established, especially when people noticed that when he wasn’t there, the South African team usually lost. 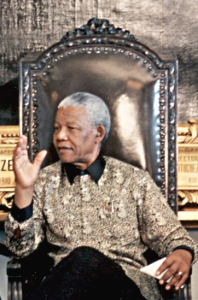 More recently I began frequenting the Quora web site, where people ask questions and others answer. I found I could answer a few questions, and answered a couple about Nelson Mandela. Then I began seeing lots of questions about the Mandela Effect, but they were quite incomprehensible, as were the answers.

I asked about it on Quora, and got largely incomprehensible answers. One said it had something to do with lots of people forgetting or remembering things, but with no explanation of how Mandela came in to it. I wondered if it had anything to do with the film Invictus, as it seemed to be something spoken about mainly by people outside South Africa.

So can anyone explain to me how there came to be two Mandela factors, with completely different meanings, one known to people within South Africa, and one, apparently, known mainly to people outside? And what does it have to do with Madiba?