Archive for the tag “race classification”

Race and identity: what is “coloured”?

Why is it that, more than 20 years after the “end of apartheid” we seem to be getting more obsessed with “race”? After Wayde van Niekerk won the 400-metre event at the Olympic Games the term “coloured” suddenly started trending on Twitter.

Why Wayde’s gold is a win for coloured identity | IOL:

The term “coloured” began trending on Monday morning and my immediate reaction was: “But why? Let this boy bask in his well-deserved glory, at least for a day.” But almost as soon as I thought that, I realised what Wayde’s win could do for the coloured narrative in South Africa. Now see, I have recently started proudly identifying myself as coloured. This was something I fought for many, many years. I was taught to resist society’s attempts to box me, to resist feeling defeated when asked “What are you?” every day for as long as I can remember. If I was to identify myself racially, it should be black, as was always the case with my family during apartheid. But then, particularly over the last two years, I began self-identifying as coloured for a number of reasons. You begin feeling marginalised, excluded from the South African narrative, called upon only when the Democratic Alliance and ANC needs your coloured vote in the Cape. You’re not white enough or black enough.

Back in the days of apartheid even the apartheid theorists had problems with the “coloured”
race classifications, they divided it into sub-categories, including “Other Coloured” for those  who didn’t fir neatly into their scheme. Also back then, most of my “Coloured” friends, when using that term to describe themselves, would use air quotes while saying “so-called coloured”. 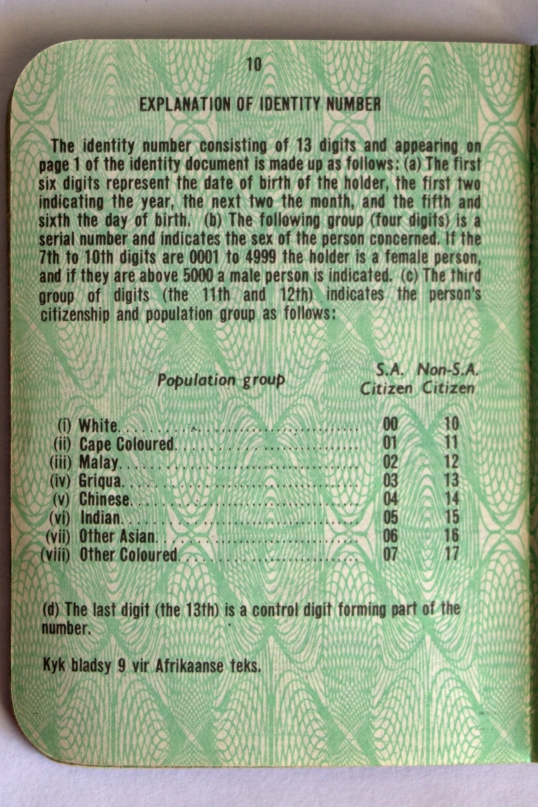 But someone recently tweeted:

If someone can be proudly Zulu for instance …. Someone should equally be able to be proudly, Coloured.

And this begs the question of what is “coloured identity”.

Comparing “coloured” with Zulu implies a cultural identity, and from the article quoted about Wayde van Niekerk that implies that “coloured” means “Cape Coloured” in terms of the old apartheid ID numbers.

We lost the old apartheid ID numbers over 20 years ago, when everyone, regardless of previous classification, was given an 08 number, and so race classifications lost some of their rigidity. But we are still asked to specify our race for things like census returns. The article quoted seems to assume some of the apartheid “own people” thinking in discussing coloured identity, as if it were simply a cultural category, like Zulu.

But a few years ago I knew a child who was born in South Africa of a Nigerian father and a Ukrainian mother. In terms of the old apartheid classification system she would be “other coloured”, but who would her “own people” be now? How should she appear on the census? Isn’t talk of a “coloured identity” marginalising people like her?