Archive for the tag “religious freedom”

Church and State and religious freedom

A couple of news items that appeared recently have important implications for religious freedom.

A Stellenbosch man is taking six schools to court over how far the institutions can go with teaching religion at state schools.

”It has been nine years that I have been on this case,” said small business owner Hans Pietersen on Friday, of a battle rooted in a ”Jesus Week” activity at his triplets’ school when they were still little.

”They wanted everybody to wear armbands for Jesus which immediately exposes everybody who is not part of those efforts,” explained Pietersen.

In contrast with that, I recall that when our daughter was at a church school Grades 1 and 2 were to put on a nativity play. There’s nothing unusual or controversial about that in a church school, but one of the teachers was careful to ask a Muslim pupil if her parents would mind if she took part. “I’ll tell them that they can be thankful I’m not the pig,” she said, and when the play was eventually performed, she played the part of a cow. But she was asked, and was not pressured into participating, unlike the children in the state school who were expected to wear armbands.

A more serious news item, however, is this one New laws to tackle commericalisation of religion in SA: report:

Government plans to introduce legislation to regulate faith-based organisations in South Africa, in an effort to cut down on religious leaders who are making millions of rands through legal loopholes.

According to a report by the Cape Argus, the new legislation will be heard in parliament in June 2017 following an analysis of the public complaints and interviews by the Commission for the Promotion and Protection of the Rights of Cultural, Religious and Linguistic Communities (CRL Rights Commission).

“We are not disputing that there are still some good religious leaders out there, but as a country we are also faced with a challenge of people who run churches like family businesses and no one questions them on how the church’s money is spent,” said Commission chairperson Thoko Mkhwanazi- Xaluva.

“We also have those who abuse their power and make congregants do all sort of things like drinking petrol and eating snakes. We can’t have things like that happening but they will continue if the industry remains unregulated.”

The word “industry” used in this connection is interesting. How does the government propose to deal with this?

For many denominations, however, there is nothing they would like more than to register with the government, because this gives them a recognition they otherwise feel they lack.

This is marvellous for church historians trying to disentangle the skeins of South African denominational history. No sooner have two or three gathered in the name of Jesus than one (or more) of them are writing off to Pretoria to be recognised and registered. And for decades civil servants in Pretoria would write back saying that the religions of citizens were no concern of the government and there was no need to register. And the recipients of these letters would promptly put the file number of this correspondence on their letterheads, to show that they were recognised.

The civil servants were being rather disingenuous, of course, because black ministers needed special permits to buy wine for communion before 1962, and they also needed recognition for concession fares on trains. So there was a complex game being played.

In the 1960s, however, the government realised that it could up the stakes in the game by conning the churches into supporting apartheid.

They changed their policy and started officially registering black churches (or saying that they were), provided that the churches concerned had a clause in their constitutions to say that their churches were only for “Bantu” and only “Bantu” could be member or leaders of the church. That conned a lot of church leaders into signing a statement that explicitly stated that their churches supported apartheid.

So the history of government regulation of churches shows that it is not an unmixed blessing, and can have serious implications for religious freedom.

If some churches are doing weird stuff like encouraging people to drink petrol or rat poison, or collecting money in dubious circumstances, then perhaps it might be best to see whether they can be prosecuted under existing laws. After all, the Nationalist government did not have to pass a special law to prosecute John Rees, the General Secretary of the South African Council of Churches, for fraud.

Christian martyrs in the 21st century

I’ve seen claims on some web sites and postings on Facebook and other social media sites of huge numbers of Christian martyrs in the 21st century, usually without anything to substantiate the numbers claimed.

Now it seems that someone has investigated the claimed figures: BBC Statistics Programme Disputes “100,000 Christian Martyrs Each Year” Claim Bartholomew’s Notes on Religion:

John Allen, author of The Global War on Christians, explained that martyrdom referred to “a situation of witness”. A martyr is not just someone who is killed for holding Christian beliefs; it can be someone who is killed because their beliefs prompt them to acts of moral courage that put them in danger. Allen gives the example of a woman killed in Congo for persuading young people not to join to militias, which is fair enough – but it’s difficult to see how this can be extrapolated to all Christian victims of the war.

According to Bartholomew’s article, the inflated figures are arrived at by counting all Christian war casualties as martyrs, in such conflicts as the Congo civil war.

It’s not just the inflated figures that disturb me, however, but it’s rather the whinging attitude that seems to lie behind them. 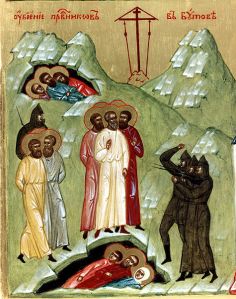 There were probably more Christian martyrs in the 20th century than in any other century in history. That was because there were ideologies like Bolshevism that promoted atheism, and persecuted not only Christians, but Jews, Muslims and Buddhists as well. Many Christians died in such events as the Butovo Massacres, and the Russian Orthodox Church has been going through the historical records and documenting as many instances as possible. Closer to home there were the martyrs of Epinga in Namibia, whose story both state and church tried to suppress.

Many Christians have died as martyrs in the current civil war in Syria, and in other 21st-century conflicts in the region, xso there have been many Christian martyrs in the 21st century, though probably not as many as some have claimed.

I can think of two good reasons for publicising martyrdom, one secular and the other eternal.

The secular reason is that it draws attention to the need for freedom of religion protected by law.

In South Africa we now have freedom of religion protected by law. Before 1994 we did not, and many Christians were persecuted for their faith, both in South Africa itself and in South African-ruled Namibia. The Epinga martyrs were one instance of this.

One of the things that arises from this is that the response to instances of violent death can show what values really motivate people.

A couple of months ago there was a terrorist occupation of a shopping mall in Kenya. In the same week there were also the bombing of a Christian church in Pakistan, and violent attacks on travellers in Nigeria. The Western media chose to hype the first incident and play down the others, barely mentioning them at all, in spite of the fact that more people were killed in those incidents than in the attack on the Kenyan shopping mall.

One is tempted to say that this was because the attack on the shopping mall was an attack on the established religion of the West — Mammonism. People tend to give more prominence to the things that interest them.

But Christians are no exception to this tendency, it seems. Christians complained about the bombing of Christian churches in Kosovo, but a number of mosques were also bombed there. A policy of religious freedom benefits all,

From the secular point of view, then violence against people because of their religious views, or any other characteristic, is seen as a bad thing. In some countries it has created a new legal category — the “hate crime”. And, if they are fair, such laws should cover xenophobia, homophobia, Islamophobia, Antisemitism and Christianophobia equally. And I think it is right that Christians should point out the evil of such acts of violence and other human rights abuses.

But in the light of eternity, Christians have a different approach.

Blessed are you when men shall revile you and persecute you,
and shall say all manner of evil against you falsely, for my sake.
Rejoice and be exceedingly glad:
for great is your reward in heaven.

In the light of that, Christian whinging about persecution, whether actual or merely perceived, seems inappropriate. Perhaps a more excellent way can be found here: Redeeming the past: a journey from freedom fighter to healer | Khanya

Swiss voters overwhelmingly approved a constitutional ban on minarets on Sunday, barring construction of the iconic mosque towers in a surprise vote that put Switzerland at the forefront of a European backlash against a growing Muslim population.

Muslim groups in Switzerland and abroad condemned the vote as biased and anti-Islamic. Business groups said the decision hurt Switzerland’s international standing and could damage relations with Muslim nations and wealthy investors who bank, travel and shop there.

When I read the first paragraph I thought it was rather sad that the Swiss should be seen to be suppressing religious freedom like that.

But when I read the second paragraph I was even more saddened by the hypocrisy of it all.

Sauce, goose, gander and all that.

As for the response of the business groups, well, it reminded me of Tom Lehrer’s saying, “Christmas, with its spirit of giving, reminds us of what we all most deeply and sincerely believe in. I refer, of course, to money.”

The government has been widely condemned for refusing to allow Tibetan spiritual leader, the Dalai Lama, to attend a 2010 World Cup peace conference in Johannesburg on Friday.

Nobel peace laureate and former president FW de Klerk and Archbishop Emeritus Desmond Tutu have both said they would boycott the event in solidarity with the Dalai Lama.

The president’s excuse that the reason for South Africa refusing the visa was that it did not want ‘to remove the world’s attention’ from the 2010 Soccer World Cup preparations is not merely lame, but a gross abuse of executive power, and is probably unconstitutional.

We are rapidly regressing to the bad old days of the Vorster regime, when, for example, Basil d’Oliveira was refused a visa to play cricket in South Africa with the MCC cricket team in 1968. That led to South Africa being isolated from world cricket for 25 years. Perhaps we need another 25 years of isolation from world soccer, since it seems we still haven’t learnt the lesson.

Our constitution is supposed to guarantee freedom of religion, and I hope someone challenges this in the constitutional court.

It is sad to see that the ANC, which fought for 70 years to liberate us from oppression, has now fully internalised the image of the oppressor, as Paolo Freire puts it, and is coming more and more closely to resemble the pigs in George Orwell’s Animal farm. Albert Luthuli, Walter Sisulu and Oliver Tambo must be turning in their graves.