Archive for the tag “Southern Africa”

Writers’ Territory by Stephen Gray
My rating: 4 of 5 stars

Twenty-seven short pieces ranging from the 16th century to the late 1960s, of people who travelled in or wrote about southern Africa. It covers most of the subcontinent, and has a variety of authors, many of them well known, and some not usually associated with southern Africa.

The selections include descriptive articles, short stories, and extracts from larger works, beginning with The Lusiads of Camoens, and ending with an extract from Terra Amata by Jean-Marie le Clezio.

Some of the authors, like Jules Verne, Mark Twain and Anthony Trollope are known mainly for their writings outside the subcontinent, while others have a more indigenous flavour. Some are professional writers, while others, like the German soldier fighting against Hendrik Witbooi’s resistance in the dry Auob valley, are just trying to describe their own experiences. What makes it interesting is that each piece views the landscape and the people from a different point of view.

Among my favourites are those that describe places I have known, like William Plomer’s description of Zululand in the 1920s. We lived there in the 1970s, so it was interesting to see what changes had taken place since then, and it is now almost as long ago that we lived there.

Another such time warp was Etienne Leroux’s description of the south-western Free State, a part of the country I have never visited, but his description could apply to many other places as well. He begins thus:

You can describe a region and its people, you can list colours, objects, sounds, generalize about types and trace its history. Out of such material a place takes on a different character for each of us, and each creates it from his personal, transcendental world which exemplifies yet again the loneliness of each of us — your own ‘true’ image cannot be shared by anyone else. I remember the sunlight through my windows one morning, many years ago, on a farm in the soutjh-west Free State, and I am suddenly filled with a longing for something that might never have existed.

And that is what this book is about, places that may have evoked longing in the writers, but perhaps different places evoke a similar longing for their readers. Sometimes it evokes a longing for youth…

There are no ruins worth talking about; only some stones where a house once stood. A new building is erected by a later generation and the old building crumbles away into a shed, a kraal,. and eventually a gravel heap with pieces of bottle and rusted kettles. What has happened to your youth? Where has it gone? You look around and see that your playgrounds no longer exist. Vanished like the mist on the vlei — which also no longer exists. It all lives on in the memory; the past is not contained in landmarks, but in the stories old people tell — and the old people die one by one.

And my blog is one of the stories that old people tell, for I am now old, old as Leroux was in my youth, when he was writing that, for he goes on to describe a funeral he attended back then:

… the farmer sons buttoned up in tight fitting snuff-grey suits and strangled by snow-white collars; the grandsons and granddaughters from the city in the uniform of the teenager: beehive hairdos and ducktails greying with dust…

That dates it to when I was 17 or 18. “Tomorrow they leave for the city on motor scooters, in Valiants and Kombis, leaving the depopulation of the south-west Free State to be felt again.”

It can be dated even more precisely from internal evidence by those old enough to remember, for he writes of “the garage painted in the glaring colours of either Shell or Atlantic or Total.” That puts it in 1959, the year that Atlantic petrol made way for BP, and after 1957, the year that Total petrol began to be sold in South Africa. And beehive hairdos were no earlier than that, even though ducktails were. And a few years later the Valiants would have had plastic oranges on their aerials.

But each place has its own memories, its own associations for each of us, and in spite of a book like this one, they cannot really be shared. They can only hint at one’s own memory of a longing for something which might never have existed.

Apartheid and racism in children’s literature

A couple of years ago I reviewed a book on Apartheid and racism in children’s literature, and commented on how I had tried to deal with that theme in a book I had written, Of wheels and witches. 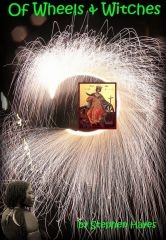 Since my book has now been published, I thought it might be good to link it with the blog post that deals with how I tried to deal with those themes in writing it. If you’re interested in reading it, you can get a free 20% sample at Smashwords, with the option of downloading the whole thing if you haven’t already been bored by it.

There is at least one review of it on Good Reads here, and I hope others may be moved to post reviews of it there or elsewhere, either before or after reading the linked post on apartheid in children’s literature.

There’s one other thing.

Good Reads has lists of books of various types, and there didn’t seem to be any list for children’s or young adult books set in southern Africa, so I created such a list, and added this and a couple of other books to it. Please feel free to add more books to the list, and to vote for this book if you liked it, or for others in that category that you have liked. Please add it to any other lists on Good Reads that you think it may belong to.

One of the most prominent political figures in the turbulent years before the independence of Zimbabwe, Bishop Abel Muzorewa, has died, aged 85.

He was seen by many as a moderate black leader at a time of extreme political change. But black militants saw him as a puppet of white politicians.

Bishop Muzorewa entered politics in the 1970s when nationalist politicians were either imprisoned or in exile.

After Zimbabwe’s independence, Bishop Abel Muzorewa was virtually forgotten by the outside world, yet in the 1970s he played a similar role in Ian Smith’s Rhodesia to that of Anglican Archbishop Desmond Tutu and Allan Boesak in South Africa in the 1980s.

In the 1970s most opposition leaders in Rhodesia were in jail or in exile, and Muzorewa’s African National Council revived the internal opposition to the Smith regime in much the same way as the United Democratic Front (UDF) did in South Africa.