Archive for the tag “Tshwane burns”

Back in 2007 we listened to President Thabo Mbeki’s speech at the national  conference of the ANC at Polokwane. We listened to it avidly all the way home all the way home from church on Sunday. It seemed much better than most political speeches, not full of platitudes. Now the Rand Daily Mail website has republished it, and I quote one of the bits that made a vivid impression on me at the time, so vivid that I can still remember where I was at the time, driving north on the N1 passing the mint and driving under the old Johannesburg/Pretoria Road bridge Mbeki’s chilling warning in 2007: A virus is eating up the ANC from the inside | Politics | RDM:

I would like to cite a vitally important observation our Secretary General made in his Organisational Report to our 51st National Conference, five years ago.

He said: “We have also reported to the NGC (held in 2000), on the challenges being in power has on the structures of the movement. We found that the issues dividing the leadership of some of our provinces are not of a political nature, but have mainly revolved around access to resources, positioning themselves or others to access resources, dispensing patronage and in the process using organisational structures to further these goals.

“This often lies at the heart of conflicts between (ANC) constitutional and governance structures, especially at local level and is reflected in contestations around lists, deployment and the internal elections process of the movement. These practices tarnish the image and effectiveness of the movement.

“The limited political consciousness (among some of our members) has impacted negatively on our capacity to root out corrupt and divisive elements among ourselves. For the movement to renew itself as a revolutionary movement, we have to develop specific political, organisational and administrative measures to deal with such destructive elements.”

Nelson Mandela also drew our attention to this challenge when he opened our 50th National Conference in 1997. Among other things he said: “One of these negative features is the emergence of careerism within our ranks. Many among our members see their membership of the ANC as a means to advance their personal ambitions to attain positions of power and access to resources for their own individual gratification.

“Accordingly, they work to manipulate the movement to create the conditions for their success.”

Far from heeding the warning, the ANC national conference rejected Thabo Mbeki, ended his presidential term early, and elected as its new president Jacob Zuma, who encouraged the very tendencies that Mbeki had warned against.

The problem Mbeki warned against has manifested itself in the 2016 municipal elections, where people protesting against the official ANC candidates have sometimes become violent, and the protests have been accompanied by the burning of buses and other vehicles, and the looting of shops, especially those owned by foreigners. 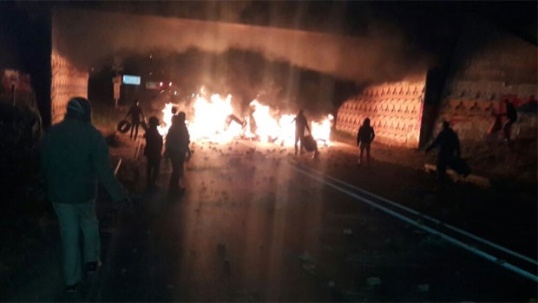 As one news report put it Looting, burning of buses continues in some Tshwane townships – As it happened | News24:

Protests that began on Monday evening over the announcement of Thoko Didiza as the ANC’s Tshwane mayoral candidate continued throughout Tuesday. The situation became so volatile that by the end of the working day, commuters were left stranded as buses and taxis lessened their services in fear of violence.

How all this happened in the case of the City of Tshwane is spelt out in this article TRAINSPOTTER: The murder of an Ordinary Member, the anointing of Thoko Didiza, and the battle for the soul of Tshwane | Daily Maverick:

The story goes like this: ordinary branch members had handed over a list of three names to the Regional Executive Committee, which, in order to fulfil its constitutional obligations, duly handed the list over to the PEC. The committee perused the list, and found that Sputla’s name was noticeably absent, while deputy mayor Mapiti Matsena’s name was written in day-glo orange. (Not the day-glo orange part.) As for the other two members, the ANC was keeping shtum. Regardless, none of the names was acceptable, because signing off on the list would have meant entrenching the factional divide, resulting in the upgrade of a long simmering conflict into a full-blown nuclear war.

Time to sniff around for a parachute candidate. The name floating around Tshwane on Sunday belonged to a member of parliament named Thoko Didiza, a former Mbeki protege turned Cabinet minister who submitted her resignation to the ANC’s new president in the fateful year of 2008. (See: battles, factional.) She nonetheless regained her parliamentarian job in 2014, was well liked, and had a general air of competence about her. According to the ANC, she even harboured vague ties to Tshwane, which is to say that she was born in Durban.

The notion of Didiza shifting resources out of the hands of those who had semi-patiently waited for them greatly displeased ordinary members of the regional structures, many of whom were gathered outside the Tshwane Events Centre on Sunday night. Shots were fired. Bullets hit male human beings. Several were injured, one “passed away”, to use the ANC’s euphemistic term for internecine murder.

The whole article is worth a read. It describes exactly how we got into the position that Mbeki warned against. The big question is, how do we get out of the hole that Zuma’s ANC has dug for us?

Around the time of the previous municipal elections in 2011 there were “service delivery” protests in various parts of the country. We went on holiday at the time, and passed through several towns where such protests had taken place, and in some cases the reason for the protests was obvious. One of the towns was Balfour, where the roads were all in poor repair (and they still were last year, when we passed through it again).

Back in 2011 the remedy seemed obvious — revive the civic organisations that flourished in the 1980s, and put up candidates who would drive the under-performing councillors out. That would be far more effective than singing songs and burning tyres in the hope that someone else would notice and do something.

But this is something different. These are not popular protests of ordinary people dissatisfied with underperforming city councillors. If the Daily Maverick article is right, these are rival factions fighting for the right to underperform in order to be able to skim off the cream for themselves. This is rival factions within the ANC protecting their own vested interests.

And if that is the case, it won’t be easy to stop it.

Twenty-five years ago there were turf wars in KZN between the ANC and Inkatha in the run-up to the first democratic elections in 1994, and more than 700 people were killed. It stopped when Inkatha agreed at the last minute to take part in the elections, and its leader was given a role in the Government of National Unity. Back in those days the ANC was led by people who wanted to liberate the country, and part of that was the desire for ubuntu, to get the people working together and sharing power to build the nation. The aim was to exclude no one, and include as many people as possible.

But when the ultimate object is to gain power to control resources for one’s own benefit, then there can be no compromises for the sake of the greater good, because the main object is not the greater good, but the good of a small group or faction. The aim is not to be inclusive, as it was back in 1994, but rather to be exclusive, because the more there are participating, the less there is available for those who want to control it for their own benefit. And it was those who wanted it that way who had gradually infiltrated and wormed their way into ANC branch structures who got rid of Mbeki. I doubt if many of them played any part in the liberation struggle.

Can you imagine him presiding as mayor over a council meeting held under an awning in the gardens next to the burnt-out shell of the city hall? Is that really what he wants? Is that the sort of person anyone would want to vote for?

As for what one can do about it, I don’t know. The only thing I can think of is to rotate the municipal councillors and mayors by voting for a different party in each election, so that they don’t stay in office long enough to get their snouts in the trough. Vote for the EFF or the DA, and hope that together they will outnumber the ANC, but that neither has an absolute majority. That way they’ll be watching each other like hawks for the slightest misstep, and that would be to the benefit of ordinary citizens.