A quick introduction to Russian culture

This week I scanned some photos of my first trip to Russia in 1995 into my computer, and posted some on Facebook, and thought I’d post some here too.

I flew from Johannesburg to Moscow on an Aeroflot Ilyushin IL62, an interesting experience. When I’d spend two years studying in the UK I returned in 1968 on a Vickers VC 10, and the two aircraft looked very similar. Both had four engines in the tail, and I was delighted to be able to fly in both.[1]

The flight, via Togo and Malta, lasted 17 hours, and my friend Andrei Kashinski met me at the airport with his friend Maxim Zapalski, who had a car, and, since it was my first visit to Moscow, they took me straight to Red Square. Andrei had arranged accommodation for me in the guest house of the Danilov Monastery, where he was supervisor of the rebuilding programme. He insisted on feeding me, though I had just had a substantial breakfast on the plane. He phoned another contact, an online friend Sergei Chapnin, who arranged for me at attend a youth conference at a parish in Klin, about 80 km north-west of Moscow along the St Petersburg road. The priest, would be coming to Moscow, and could give me a lift to Klin. 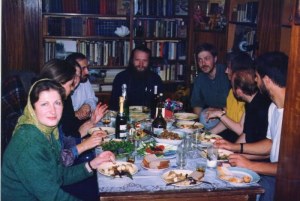 So back in the car with Andrei and Maxim, and they took me to a flat in a block in north-west Moscow. Guests were expected, but I was the unexpected guest, and the first to arrive. The flat was tiny, but crammed with books on every wall It turned out to be a welcoming party for Alexei Kurenkov, who had just returned on the plane from New York, where he was studying at St Vladimir’s seminary. And there was a fantastic feast — my third of the day, and though I had lost track of the time it felt like mid-morning. It was July, and I’d flown from winter to summer, from short days and long nights to long days and short nights.

So my first practical lesson in Russian culture was within an a couple of hours of arriving. Russians eat a lot, and you can’t visit a friend without being fed. My fellow blogger Clarissa describes this and other aspects of Russian culture in her blog Clarissa’s Blog: What You Need to Know About Your Russian-Speaking Friend:

A Russian-speaking party is very different from the Anglo-Saxon party, for example. For one, nobody stands while trying to balance the plate and the glass. Everybody sits around a big table. Regardless of the economic situation of your Russian-speaking hosts, food will be abundant and will consist of several courses with many food choices. Nobody will ever ask you eat off a paper plate and drink out of plastic cups. The table will be beautifully and properly laid, there will be beautiful table linens and dinnerware.

And that’s the truth. The more people you visit, the more you eat. If you visit a lot, you can end up having six or seven meals a day.

In South African culture, or should I say South African white urban culture, if you are going to drop in to see someone unexpectedly, you try to avoid doing so at meal times, so that your hosts don’t feel obliged to feed you. In Russia, there is no avoiding meal times, because meal times are whenever guests arrive.

It took me a little while to get used to this. I once made the mistake of thinking I could pop in to say hello to someone before jumping on the Metro to go to a service at a Cathedral. No chance of that. Fortunately the Cathedral was full and anyway in Orthodox services people arrive late all the time.

Rural black culture in South Africa is still a bit like that. You can drop in to say hello to someone and then when you want to go they say you must wait, because someone has gone out to catch a chicken to slaughter for a meal. The amazing thing (to me) about Russia is that that kind of attitude has persisted in urban culture, even in big cities like Moscow.

[1] The VC 10 and IL 62 were my favourite passenger aircraft, and here is a comparison:

The Il-62M had a dispatch rate with Aeroflot of 97% with some examples logging as many as 17 flight hrs/day, and it was described as the most reliable type in the fleet at that time (Gordon et al., 2004). It set several international records in its class, mostly exemplifying a range capability far in excess of the conservative Aeroflot calculations applied in Soviet times. Some of these records were set by an all-woman crew of five captained by Iraida (“Inna”) Vertiprahova. With 10 tonnes of freight, the Il-62M had a maximum range of 10,300 km compared to 9,412 km for the VC10 carrying the same weight. With a 23 tonne payload, the Il-62M range was 8000 km, compared to 6,920 km for a Boeing 707 with maximum payload.