Archive for the tag “white liberals”

There seems to be a trend, not exactly new, because it’s been going on for several years now, to blame anything that’s perceived to be bad on liberals. Here are a few examples that turned up in my Facebook feed this morning:

A liberal mom got a rude awakening that changed her views about the “bathroom debate” and decided to share her story regardless of what the backlash would be. This is a reality check like no other.

Kristen Quintrall Lavin runs a blog called, The Get Real Mom, in which she exposes the harsh realities of what she calls, “momming.” However, on a recent trip to Disneyland with her young son, Lavin, she was exposed to another harsh reality — the reality of bathroom stalking, which made her question her progressive liberal views on the bathroom debate.

In the departure lounge of OR Tambo (taking a break from complaining about the missing TV remote and milk) Helen Zille, the former leader of South Africa’s opposition party, the Democratic Alliance (DA), and premier of the Western Cape, casually invoked one of the continued liberal myths of colonisation – that Europeans brought with them medical care to the colonies.

My question is, what does the gratuitous insertion of the word “liberal” contribute to either story?

I suspect that the answer is that the not-too-heavily disguised purpose of both articles is to make liberals and liberalism look bad or stupid.

But this kind of devaluation and debasing of the word “liberal” and turning it into a kind of general signal for disapproval tends to make it meaningless.

The main reason that people dislike liberals and liberalism is that they themselves tend to be authoritarian. Authoritarianism can range all the way from mild bossiness through being a control freak to being an absolute dictator, like Hitler or Stalin. But people who diss liberalism do tend to be control freaks of one kind or another.

Another trend, also not exactly new, is to devalue terms like “genocide” by applying them to things that are a great deal less than genocide.

If I wanted to follow that trend, I could say that all this anti-liberal propaganda is calculated to provoke liberalophobia (fear and loathing of liberals), in which the next step would be a genocide of liberals.

That wouldn’t be true, of course, because “genocide” means the systematic and planned extermination of an entire race of people, and liberals are not a race (in spite of the attempts of racists to make liberals seem to be a race by prefixing the word “white” to “liberal” when the latter is used as a noun). If it isn’t hate speech, it is at least anti-liberal propaganda.

My daughter recently accused me of mastering the art of clickbait when I reblogged another post recently (the curious can find it here). Well yes, the heading of this post probably may be seen as clickbait, Whether you believed or anyone expected what happened next is up to you.

So no, I don’t expect a liberal genocide (but see here), but authoritarian governments do tend to kill off or at least crack down on liberal opposition. And most colonial governments have been authoritarian, at least vis-à-vis the colonised, whatever Helen Zille or Matthew Wilhelm Solomon may say.

I recently discovered a new academic discipline, or pseudo-discipline, called “Whiteness Studies”, through some friends who appear to take it seriously.

From what I’ve been able to see, it this discipline proposes to cure racism by encouraging racist thinking, which, it seems to me, is a bit like an alcoholic thinking that the cure for his craving is another drink.

If any of this interests you, I’ve written a series of four blog posts on it, here:

Comments welcome, there or here.

I thought I’d written enough on it, but someone posted something on Facebook that made me change my mind: Foreskin Man and Vulva Girl Team Up to Battle Circumcision in Africa:

Male and female circumcision collide in Foreskin Man #3 when America’s most controversial superhero attempts a daring rescue in the jungles of Kenya. 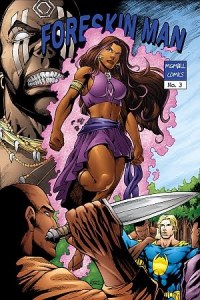 That looks like a rather good candidate for #20 Being an expert on YOUR culture | Stuff White People Like, though with a somewhat different slant on it. That seems to be the essence of Whiteness, as defined by the American discipline of Whiteness Studies.

But I’m getting ahead of the story, which begins here, in a web article someone recommended to me, about Racism 2.0, which is the racism practised by white liberals in the USA Tim Wise | With Friends Like These, Who Needs Glenn Beck? Racism and White Privilege on the Liberal-Left. And, it seems to me, the comic book Foreskin Man and Vulva Girl Team Up to Battle Circumcision in Africa seems to be a good example of Racism 2.0 as practised by white liberals in America. The gallant white superhero, representing enlightened Western values, sets out to rescue the barbaric Africans from their darkness. The cover of the comic says it all.

One of the things that human beings seem to do a lot is modify their bodies. The way they do this varies with different cultures, and as time passes cultures change, and bodily modifications fall in and out of fashion. One such fashion in the USA has been male circumcision. Another, common in the Western world, has been female ear piercing, and in some sub-cultures in the West piercing other parts of the body and sticking safety pins and other objects in the holes. A southern African varient of earpearcing, about 70-80 years ago, involved putting wooden cotton reels in holes in one’s earlobes.

Other such practices are knocking out front teeth, tattooing, and lengthening necks and penises. In China there was the practice of foot-binding of girls, because small feet on women were fashionable.

Another thing about this is that bodily modifications that one culture regards as normal seem bizarre and barbaric to people from other cultures.

In the 19th and early 20th century Christian missionaries travelled from Western Europe and North America in large numbers to preach the Gospel of Jesus Christ to people in other continents, and they came across many cultural practices that they found strange, and some that they found abhorrent. Among the ones they found abhorrent ones were foot-binding and female circumcision.

In China it was Christian missionaries who founded the Natural Foot Society, to discourage the practice of foot-binding. And in parts of Africa missionaries, who were associated with colonial governments, discouraged female circumcision. In Kenya, where, in the 1920s, all schools were controlled by various religious bodies, some missionaries, led by the Church of Scotland, insisted that all teachers in the schools should take an oath against female circumcision, which was practised by the Kikuyu (Agikuyu) people. This led to the formation of independent African-led educational associations, and eventually contributed to the establishment of the Orthodox Church in Kenya (see Orthodox mission in tropical Africa).

The policy of demanding oaths came back to bite the colonialist missionaries, however, when, about 20 years later, the Mau Mau movement began getting their members to take oaths to fight against the British colonial regime. Suddenly “oath-taking ceremonies” were made illegal, and suspicion that someone had participated in one became sufficient cause for detention without trial. All Kenyan Orthodox clergy were detained. 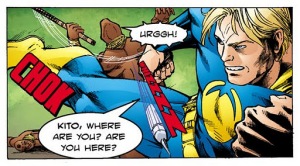 White Western secular liberals have often been quite vociferous in condemning the way in which Christian missionaries “destroy indigenous culture”, but are not averse to doing exactly the same thing when other people’s cultural values conflict with their own, and using neocolonial powers to put the squeeze on people who resist.

In a way, I can empathise with those who object to female circumcision. I can still recall the shock and revulsion I felt when I read about it as a teenage schoolboy in a book called Blanket boy’s moon by Peter Lanham and A.S. Mopeli-Paulus, which described the practice in Lesotho:

The first night of the (circumcision) school is known as the Marallo, the secret night. This night is spent outside the village in the dongas, where ritual dances are taught and new code names are given to the girls — so that they can afterwards challenge the claim of any woman who states that she is circumcised.

At Marallo, too, the Khokhobisa-tsoene, or “Hiding-of-the-monkey” is encompassed. The girls are cut with a blade in their outer sexual organs, and a flap of flesh is drawn down to cover that mischievous “monkey” which can be the source of much pleasure to uncircumcised girls. The performance of this rite tends to encourage chastity among the women, for a circumcised girl can know little of the joys and passions of physical love. During this ceremony when the blood flows from the wounded flesh, black magic medicine is rubbed in as a protection against bewitchment.

It can perhaps be said that the circumcision of women not only denies the girl great pleasure and joy in the sexual act, but must in consequence lessen the happiness and exaltation of the man, and thus shut out any upliftment of the spirit — lying with a woman, then, becomes a selfish rather than a mutual pleasure. Here in the very homeland, in this circumcision of women, lie the seeds of the physical love of man for man, which is brought to flower in the living conditions imposed on African mine workers by the white man.

As a schoolboy I found that more scary even than a description of a ritual murder elsewhere in the book.

But an interesting thing is that though the protest against the Protestant missionaries’ attempt to suppress female circumcision was one of the factors that helped the Orthodox Church to grow in Kenya, very few, if any, Orthodox Christians practise female circumcision today, not because of high-handed colonial or neocolonial suppression, but rather as a result of people seeing no need for it within a Christian worldview.

Western cultural imperialism hasn’t changed very much. Whether practised by Protestant missionaries or liberal secularists, it looks much the same. And I won’t say it doesn’t exist in South Africa. There are signs of it, for example when you get white suburbanites objecting to their black neighbours next door ritually sacrificing a goat, but generally I think white racism in South Africa takes different forms from that in North America. The North American version, with Foreskin Man going out to deal with the black savages in far-away places, is perhaps typical of the American version. And Foreskin Man doesn’t seem to be interested in rescuing the people his fellow-countrymen drop bombs on, in places like Yugoslavia, Afghanistan and Iraq, where they lose a great deal more than their foreskins.

Apart from anything else, to me Foreskin Man and Vulva Girl sound utterly kitsch. But that’s probably just my cultural prejudice speaking.