Elidor by Alan Garner
My rating: 5 of 5 stars

I’ve just finished reading Elidor for the seventh time (or is it the eighth?), and was quite surprised to see that it was nearly 25 years since the last time I read it.

What prompted this reading was that someone wrote a rather nice review of my children’s book Of wheels and witches, and I began to wonder if it was worth trying to write a sequel, and I began to re-read Elidor to get me in to mood to think about it.

That’s because Elidor is, in my view at least, a kind of paradigm case of what a children’s fantasy novel should be. 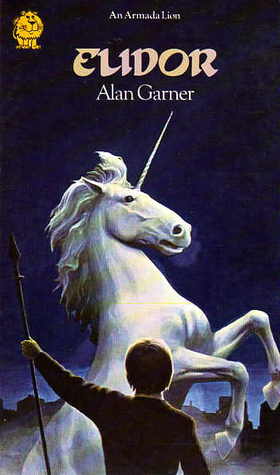 It’s a bit like a combination of C.S. Lewis and Charles Williams. Though Lewis wrote stories for children, Charles Williams never did, but I imagine that if he had he would have written something like Elidor. The first 50 pages are like Lewis — some children are snatched away into another world, the devastated dying world of Elidor. But the rest of the book is like Williams — the other world irrupts into this world.

The protagonist of Elidor is Roland Watson, the youngest of four middle-class siblings who live in Greater Manchester. In various parts of the story Alan Garner satirises bourgeois tastes and values and contrasts their tameness with the wildness of Elidor, which only Roland really appreciates until, in the end, the wildness of Elidor overwhelms them all.

We are not told how old the children are, though, because of the time that elapses in the story, a little over a year, they would be a year older at the end than the beginning. The one clue is that at the end the eldest, Nicholas, buys bus tickets for the four of them and asks for “one and three halves”. If Manchester was anything like Johannesburg, then children started paying full fares after they turned 12. So Nicholas is about 12, his sister Helen about 11, David about 9, and Roland, the protagonist, about 7 or 8. And they would all have been a year younger at the beginning of the story.

What I find interesting about this is that we are told that children like to read stories about children slightly older than themselves, and are less interested in ones about children who are younger. Yet in Elidor the protagonist, the one who takes the initiative, is the youngest. When my son was about the age of Roland in the story he tried to read it, and gave up because he found it “boring”. He was, however, quite happy to have it read to him. I think that may have been because he found it difficult to read. The reading level is more for 10 or 11 year olds.

So I wonder whether any children actually liked Elidor. Or any adults, for that matter. Perhaps it’s just me, and perhaps I’m looking for inspiration in all the wrong places.

But then I looked at the GoodReads lists that Elidor is on, and it is on quite a number of them. And perhaps the most telling, in the light of what I have just written, is:

That pretty much says it all.

I originally posted this on 3rd April 2017, right after I had finished reading Elidor. As I usually do, I posted a basic review on Good Reads, and copied it to this blog with a few additional comments.

Three days later, at our literary coffee klatch, Prof David Levey raised one of the points I had made here — about Alan Garner’s fantasy stories being as much about this world as about other worlds, and the other worlds entering this world, rather than people leaving this world to go to other worlds.