In May 2005 Val and I set off on a holiday trip to the UK. We didn’t blog about it as we went along, because we did not always have internet access, so this is written after the event. One post that we did have at the time was this one on Ancestral Places.

Most of the family bits in in our family history blog, and some of the parts where we visited friends are in our other blogs, but each post is linked to the next so anyone interested in following them in order can do so. This page lists them all, so people interested in a particular place or people can go straight to what they are looking for.

Because of our interest in family history, we visited relations, some of whom we had never met before, and also some of the places our ancestors had come from. We visited old friends, some of wwhom we hadn’t seen for many years.

Val had visited the UK in 1971, and I had gone there for postgraduate study at St Chad’s College, Durham, from 1966-1968. It was over 30 years since either of us had been there, so there were many changes, some expected, and some not.

Here, then are the links to the posts.

The time was all too short, but we were able to visit relations we had never met

and some that we had met but rarely see

Pearson/Ellwood cousins in Edinburgh, 11 May 2005

old friends that we hadn’t seen for a long time 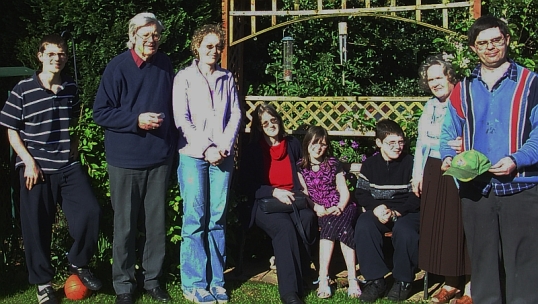 And places new and old